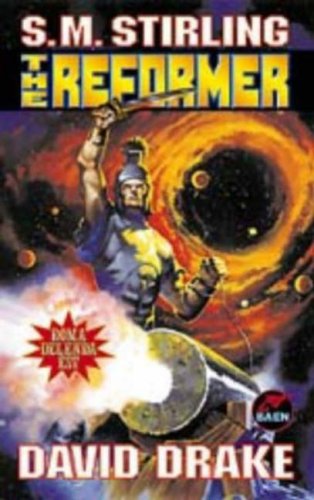 Military SF experts Stirling and Drake move into hardcover for the seventh entry in their General series (The Chosen, etc.), about soldier-statesman Raj Whitehall and the sentient computer, Center, influencing the course of civilization in a far-future galaxy. This time, the discarnate minds of man and machine do their good work on a planet that has regressed to a level of technology resembling that of the Roman Empire; there's even an equivalent to Rome (Vanbert), which has conquered the local version of Greece (Emerald, with its capital of Solinga standing in for Athens). Aided by Whitehall and Center, Adrian Gellert, a Solingian law clerk working in Vanbert, becomes involved in a rebellion, along with his warrior brother, Esmond. Before they have to flee, they introduce gunpowder grenades to Vanbert. They also equip King Casull of the Isles with arquebuses, cannon and steam-driven ironclad rams. The climax, occupying a third of the novel, involves the Islanders' assault on Vanbert's coastal city of Preble, and is told with the knowledge of military tactics and hardware, and the vividly described action, that readers expect from Stirling and Drake. There's not much originality on display here, and the ending is indecisive, but devotees of military SF should enjoy themselves nonetheless. (Apr.)
close
Details