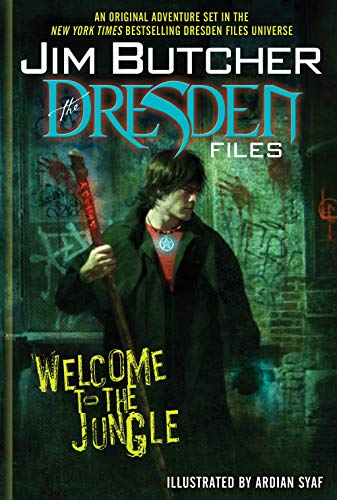 The Dresden Files: Welcome to the Jungle

Author Butcher is the creator of the Dresden Files series of novels (the basis for the short-lived Sci-Fi channel series), and this fun graphic novel is the prequel to his first Dresden book, . Blurring the lines between fantasy and noir, Dresden is a scrappy, rough-and-tumble “consulting professional wizard” who's often hired by the Chicago police to work on those crimes that enter the supernatural. Given only 24 hours to solve an inexplicable and gruesome murder at the zoo, Dresden has to deal with unhelpful zoologists and police, a helpful but confused potential love interest, packs of demonically possessed animals and several deadly enchanters along the way, eventually uncovering a plot by one of mankind's great ancient foes. If the story is not particularly deep, it's breathlessly paced, with plenty of quirks and details (one of Dresden's closest friends and allies is an ancient talking skull), and a compelling page-turner. Syaf's art is always effective, but sometimes ping-pongs between generic action-comic combat poses and more personal and evocative horror art. This book is a decent start to a new medium for the series and may pique the interest of those unfamiliar with Dresden and Butcher.