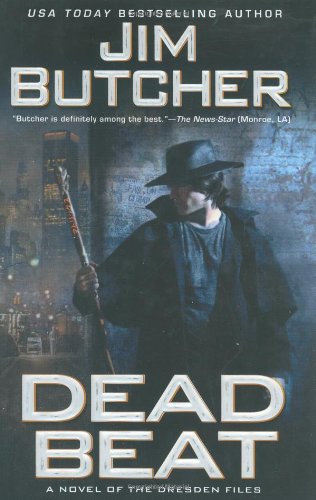 DEAD BEAT: A Novel of the Dresden Files

Butcher's seventh comic supernatural Dresden Files novel makes a welcome leap to hardcover (after 2004's ). Harry Dresden, a wizard PI living in Chicago with his half-brother, who's an incubus, and his dog, Mouse, learns that his girlfriend, a Chicago police officer specializing in occult investigations, is being blackmailed by a vampire. Unfortunately, every dark-magic wielder in Chicago apparently wants the same thing as the vampire—the spells of an unpleasant necromancer, Kemmler, whom Dresden's employers, the White Council, eliminated some years earlier. With Kemmler's spells one can summon the Erlking, the leader of the Wild Hunt, and draw on his magic to achieve godlike powers—at the cost of thousands of lives. To thwart the various ghouls, sorcerers and body-stealers in their evil quest, Dresden must turn for help to a reluctantly heroic medical examiner, Waldo Butters; a pack of werewolves, the Alphas; and a fallen angel, disguised as a bookstore clerk. Horror fans with a sense of humor will be pleased.