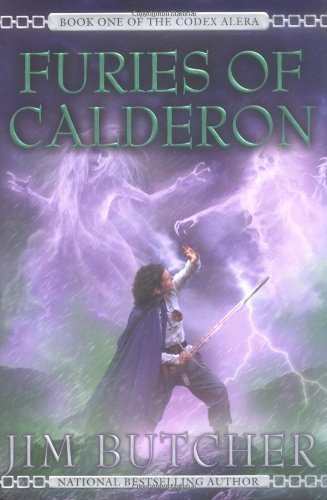 FURIES OF CALDERON: Book One of the Codex Alera

At the start of Butcher's absorbing fantasy, the first in a new series, the barbarians are at the gates of the land of Alera, which has a distinct flavor of the Roman Empire (its ruler is named Quintus Sextus and its soldiers are organized in legions). Fortunately, Alera has magical defenses, involving the furies or elementals of water, earth, air, fire and metal, that protect against foes both internal and external. Amara, a young female spy, and her companion, Odiana, go into some of the land's remoter territories to discover if military commander Atticus Quentin is a traitor—another classic trope from ancient Rome. She encounters a troubled young man, Tavi, who has hitherto been concerned mostly with the vividly depicted predatory "herdbanes" that threaten his sheep as well as with his adolescent sexual urges (handled tastefully). Thinking that Amara is an escaping slave, Tavi decides to help her and is immediately sucked in over his head into a morass of intrigues, military, magical and otherwise. Butcher ( , etc.) does a thorough job of world building, to say nothing of developing his action scenes with an abundance of convincing detail. This page-turner bodes well for future volumes.