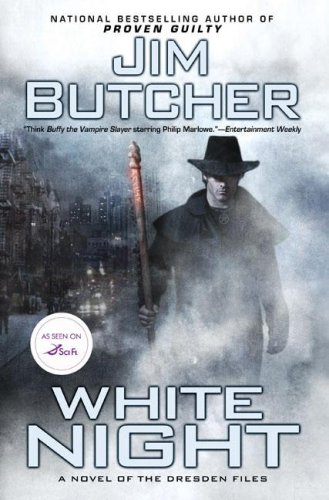 White Night: A Novel of the Dresden Files

At the start of Butcher's superlative ninth Dresden Files novel (after 2006's ), hardboiled wizard detective Harry Dresden learns that someone is killing Chicago's minor wizards. Joined by his police friend, Sergeant Murphy, and his Amazonian apprentice, Molly Carpenter, Harry discovers that his brother, Thomas, is a prime suspect. As a Warden of the White Council, at war with both the Red Court of blood-drinking vampires and the White Court of psychic vampires, Harry has to go into action. And there's plenty of that, including a battle with ghouls on the lakefront that turns into a gripping flashback of another encounter with ghouls some years before in New Mexico. The large cast features such finely drawn characters as gangster Gentleman Johnnie Marcone and Harry's first love, Elaine Mallory. This installment is sure to get a lift from TV series, which debuted on the Sci-Fi Channel in January.