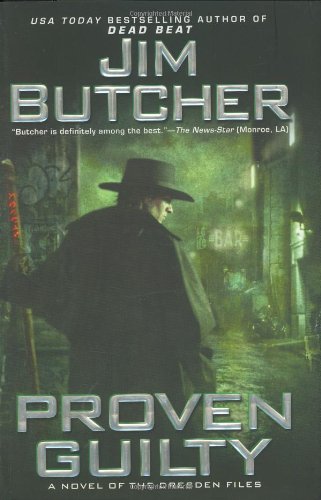 Proven Guilty: A Novel of the Dresden Files

Harry Dresden, Chicago's only consulting wizard, takes on phobophages, creatures that feed on fear who attack a horror film convention, in the diverting eighth installment of Butcher's increasingly complicated Dresden Files series ( , etc.). Harry finds that fighting monsters is only the prelude to maneuvers amid the warring wizards of the White Council and the vampire Red Court. Less and less V.I. Warshawski with witchcraft, Harry aims his deductive powers at political intrigues rather than crime solving. The body count from the magical melees, however, would do any hard-boiled gumshoe proud. Butcher's believable, likable set of characters go for the jocular much more than the jugular. Deeper fears do run through the book, and Harry, taking on an apprentice, has to face up to the consequences of his all-too-human failings. Look for the series to really take off with the debut of a two-hour pilot on the Sci-Fi Channel this summer produced by Nicholas Cage.