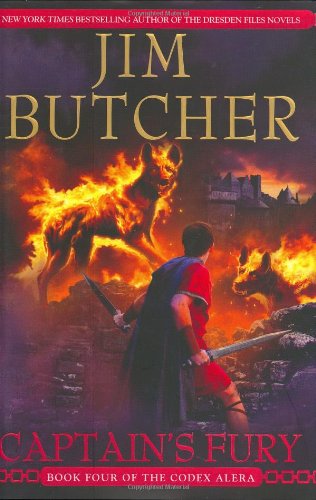 Sharp tactical plotting, hazardous cross-country travel and a dash of sardonic humor mark Butcher’s fourth Codex Alera novel (after 2006’s ). Two years into a difficult campaign against the wolflike Canim invaders, Calderon legion captain Tavi is saddled with an unqualified but politically powerful superior whose plans threaten disaster and force Tavi into potential treason. Meanwhile, aging ruler Gaius Sextus plans a final strike against the rebellious lord of Kalare, but to get close enough to act, he must set aside his power to control the elements and make a painful overland slog that neatly challenges genre conventions. Butcher deftly deploys intrigue, conflicted loyalties and hairbreadth action to excellent effect. Few writers balance military realism and cinematic swashbuckling with so much skill or wit. Series fans will welcome the revelation of Tavi’s long-secret heritage and the strong climaxes resolving most of the immediate conflicts, while newcomers will have no trouble navigating the well-developed landscape.