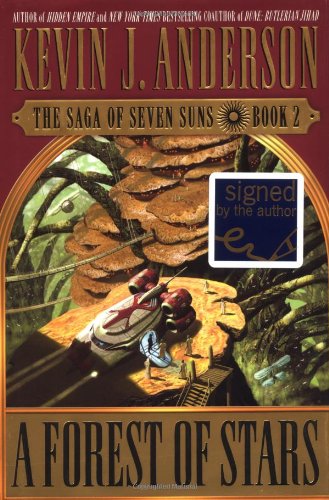 A FOREST OF STARS: The Saga of Seven Suns: Book 2

Bestseller Anderson turns up the heat in his second Saga of the Seven Suns installment (after 2002's ), proving he has firepower to burn. He weaves action, romance and science with a rousing plot reflecting the classic SF of Clarke and Herbert and the glossy cinematic influence of Lucas and Spielberg. Five years after the events in , hydrogues, gas giant aliens, continue to plague the Terran Hanseatic League in retaliation for the Hansa's "accidental" destruction of a hydrogue planet. This time they're also eager to destroy their ancient enemy, the Verdani, an interconnected, semi-sentient worldforest far more dangerous to the quicksilver aliens than mere humans ("The roots of a tree can shatter mountains, given time"). EDF (Earth Defense Forces) have hidden enemies in the Klikiss robots, whose resolve to reprogram "compies" (short for "Competent Computerized Companions") into human-killing robots is just as alarming as covert alien experiments on humans. Anderson's well-drawn cast includes spy Davin Lotze, an exosociologist who discovers a new method of space travel; earthy space-trader Rlinda Kett; King Peter, a reluctant "puppet" who challenges power-mad Basil Wenceslas; and DD, the terrified friendly compy kidnapped by a ruthless Klikiss robot. Sparked with surprises, enriched by ecological issues that laypersons can appreciate, this saga soars as it exposes the inner and external roots of war.