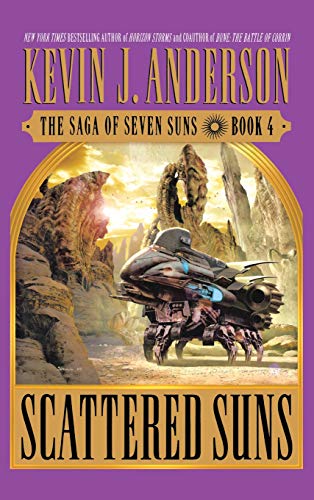 Scattered Suns: The Saga of the Seven Suns: Book 4

Bestseller Anderson delivers more on-the-edge-of-your-seat SF thrills in the fourth installment of his Seven Suns saga (after 2004's ). Moments of extreme tenderness temper the relentless and often graphic descriptions of a brutal, seemingly endless war among the civilizations that populate the Spiral Arm. As before, menacing turncoat Klikiss robots plot to eradicate all humans (and humanoid alien Ildirans), while the delightfully dismayed DD, a captive robot "compy," takes notes in the event he ever escapes the Klikiss and can warn the humans he serves. Meanwhile, the angry hydrogues, who inhabit gas-giant planets, continue their campaign against humans, verdani ("worldforest" dwellers) and faeros (sun dwellers). Anderson handles a huge cast and complicated plot with élan.