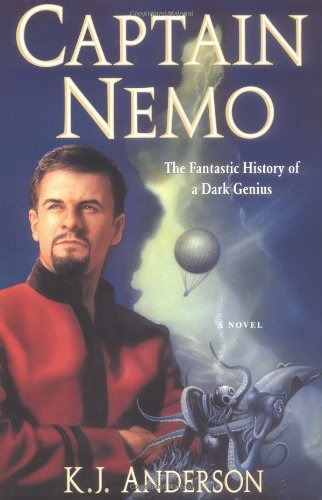 CAPTAIN NEMO: The Fantastic History of a Dark Genius

Prolific bestseller Anderson (; the original Star Wars anthologies) pays dashing homage here to Jules Verne (1828–1905), one of the genre's founding fathers and creator of the brooding captain of the , hero of . In this fictionalized biography of Verne, Anderson postulates a "real" André Nemo, Verne's boyhood friend who lived the life—and then some—that Verne wanted but didn't dare to follow. After young Nemo's father dies in a shipbuilding accident in Nantes, Verne runs off to sea with Nemo, only to be jerked back by his dry-as-dust father to the caning of his life, then law school. Both Nemo and Verne love the luscious Caroline Arronax, but her heart belongs to Nemo alone. She patiently waits through his exotic adventures, which Verne eventually shapes into his (, etc.), wildly popular whales-of-tales that made the French author wealthy and famous. Anderson's rollicking whopper of a novel glides along smoothly in a style deliberately modeled on Verne's own, yet unvexed by the scientific detail that often bogged down Verne's prose and muddied his narrative waters. Anderson's Nemo, whose stories alternate here with Verne's, is a sympathetically drawn Byronic hero, playing off the pedestrian Verne, a multitude of flamboyant pirates, Turkish caliphs, raging sea monsters and the incomparable Caroline, a proto-feminist shipping executive and composer. No one would miss the boat by signing on this fantastic journey. (

, Invasion of the Sea The Mysterious Island