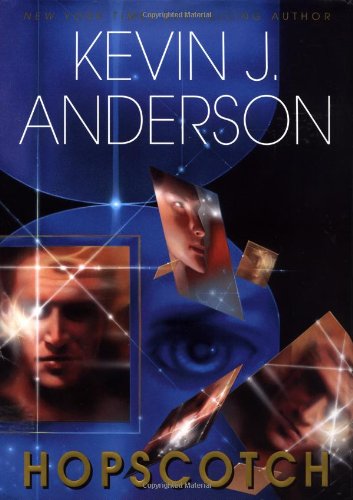 Bestseller Anderson, author of numerous novels set in the Star Wars and X-Files universes, offers a dizzying, body-swapping plot that interlocks four central characters in a constantly shifting maze of confused identities and even more confusing chases upon chases. Emerging from Falling Leaves monastery and the care of motherly female monk Soft Stone, four orphan "Swans" take on the raging hedonism of a society whose absorption in virtual reality triggered the ability to "hopscotch" between bodies. A passion for painting drives talented artist Garth; the search for life's meaning possesses uncertain, questioning Teresa; risk taking impels impulsive Eduard, whose lucrative but risky business is feeling others' pain for them; and calm, reasonable Daragon, who inexplicably cannot hopscotch but who can "see" true identities, joins the powerful Bureau of Tracing and Locations headed by malignant Mordecai Ob, the nemesis who over the years tries to destroy them all. While body hopping makes for strange and improbable bedfellows, the device tends to disrupt the intersecting plot lines as much as the author's often trite dialogue and simplistic motivations. Nonetheless, Anderson poses a question sure to frighten his readers: what if those virtual reality games aren't so innocent after all? The unsettling, kaleidoscopic jacket art perfectly complements the text.