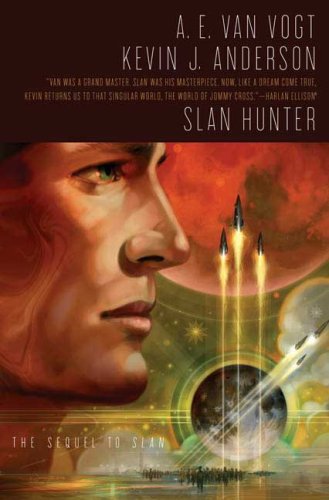 Working fluently from an incomplete draft and outline by the late van Vogt, Anderson picks up where the classic pulp predecessor, (1940), left off, with the true mutant (or slan) Jommy Cross trying to head off the impending invasion of Earth by the Mars-based group of slan without tendrils. Opposing him again are John Petty, head of the secret police and chief slan hunter, and Jem Lorry, traitorous presidential adviser and leader of the invasion. Seeking his dead father's hidden retreat, Jommy hopes to uncover the origins of both the true and the tendrilless slan, to stop their internecine war and to relieve human fears of being replaced by artificially created supermen. Van Vogt and Anderson ( ) produce a convincingly styled book that could have been published in the 1940s. Though Anderson can't plug all the holes in Grand Master van Vogt's logic, the fast pacing, melodramatic situations and snappy (if dated) dialogue all match the original seamlessly.