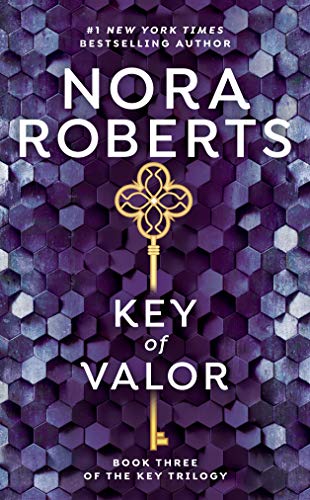 THE KEY OF VALOR

This book concludes Roberts's Key Trilogy, in which mortal women quest to unlock the spellbound souls of ancient demigoddesses. The third and last woman to make the attempt is hairstylist Zoe McCourt. Like her friends Malory and Dana—heroines of the previous installments ( , )—Zoe has a single month and a cryptic set of clues with which to find her key. The angry sorcerer Kane fights her efforts as friends both mortal and immortal lend their support. As she searches, Zoe is courted by Bradley Vane IV, the sexy heir to a home improvement empire. She's not sure which is more difficult: accepting that she's magically linked with Brad or trying to quell her suspicions long enough to accept his love in the here and now. When she finds the courage to do both, the souls of all three goddesses are finally released. Smart but struggling single mom Zoe is an appealing heroine whose working-class grit finds a perfect foil in Brad's patrician confidence. Scenes involving her feisty son, Simon, temper the story's mysticism with humor, and the joining together of the trio as a family is genuinely moving. When it comes to combining sweetness, sexiness and the supernatural, Roberts proves once again that she is the most powerful spellbinder of all.