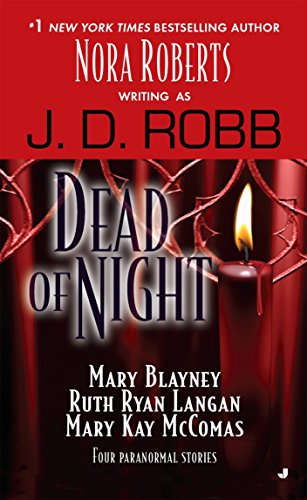 Robb (aka Nora Roberts) is indeed the headliner, but this all-new four-novella anthology definitely doesn't suffer from “standout single” syndrome—this one's all killer, no filler. In Robb's opener, a courageous female cop with a troubled past clashes with a bloodthirsty, unnaturally powerful mystery man who promises his enthralled victims immortality: charismatic con artist, or much worse? Blayney follows with the story of an enigmatic old coin that transports an American tourist and an oddly aristocratic bartender into a Regency-era adventure. In Langan's, another unsuspecting American time-traveler stumbles into romance with a 15th-century Scottish warlord who believes she's his kidnapped wife. And in McComas's, a bored housewife takes a magic carpet ride to an alternate universe do-over of her marriage. Though they don't always keep a straight face, occasionally tipping from fantasy into farce—for instance, a canny medieval Scottish ruler blithely accepting a 21st-century designer pant suit as regulation female barbarian dress—such lapses are minor; the biggest fault readers will find is that these intriguing characters are taken away so quickly (especially in Blayney's frustratingly rushed resolution).