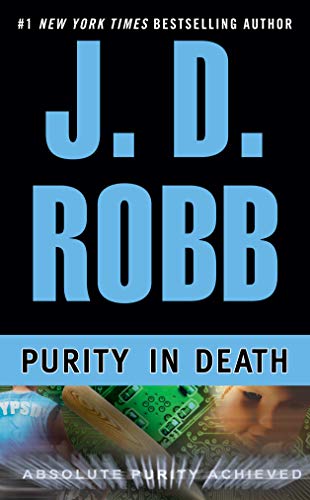 "A sick computer can and does infect other computers, but not its operator," claims Roarke, dreamboat husband of New York's hotshot futuristic cop, Lieutenant Eve Dallas, in the 15th installment in Robb's 'Death' series (after ). Roarke's theory is put to the test when pedophiles and drug dealers begin dying from a computer-generated virus that literally blows the mind of its victims. It doesn't take long for Eve to figure out that a vigilante terrorist organization with superior tech knowledge is meting out its own form of justice— the group even leaves the message "absolute purity achieved" on victims' computer screens. Pinpointing the group is more of a challenge. Suspects could be anyone from members of the justice system to formerly abused children, the latter of which strikes a personal and painful nerve in Eve, who was abused as a child. Readers familiar with Eve's history and the sea of characters brought over from her previous books will be more comfortable than first- timers attempting to wade through this sluggish installment. Despite Robb's smooth-as-glass prose, her latest isn't likely to win new converts to the series.