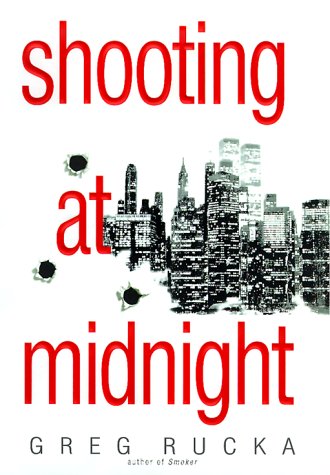 Having thrilled readers with his series about security expert Atticus Kodiak (Smoker, etc.), Rucka now shifts the focus here to Atticus's lover, Bridgett Logan, a private eye, a New York City cop's daughter and, unbeknownst to Atticus, a recovering heroin addict. When Lisa Schoof, a fellow ex-addict and single mother, is arrested for the murder of her old lover Vincent Lark, Bridgett feels responsible. Vincent, a drug dealer and pimp, had threatened to kill Lisa if she didn't give him $2800 or resume working for him. Bridgett had tried to scare him off, but the scare clearly didn't take. Desperate to help the friend who once saved her life, Bridgett goes deep undercover, working for Vincent's boss, druglord Pierre Alabacha, hoping to find enough evidence for the authorities to prosecute Alabacha and drop the charges against Lisa. These under-the-table negotiations between Bridgett and the NYPD are hardly believable, but a palpable sense of danger drives the narrative. Rucka takes an ill-advised breather near the middle of the novel, when Atticus assumes the first-person voice for a short section, but he then forges ahead with a flourish that might remind readers of the late Eugene Izzi. At the close, the cops, the dealers and the troubled lovers (Atticus and Bridgett) all collide in a breathless barrage of betrayal and brutality. The result is a crime novel that, if not strictly realistic, possesses a relentless and nearly irresistible force. (Oct.)
close
Details