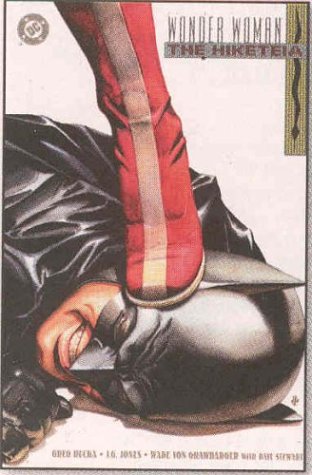 Princess Diana, Wonder Woman's real identity, grew up steeped in the ancient Greek culture and society. As Wonder Woman, she's been through culture shock going from her distant home to the outside world. While she has adjusted somewhat to the differences, much about this world still surprises her. As the story opens, Diana is confused when a young woman comes to her and offers herself in the ancient ways of supplication. Diana isn't sure what to make of Danielle Wellys, but she accepts the woman as a supplicant and makes "Hiketeia," binding herself to protect Danielle. However, Danielle has problems that not even Wonder Woman may be able to guard her from. Danielle's been seeking vengeance since her sister was murdered, and her mission has involved everyone from the ancient Greek Furies to Batman. As Batman, Wonder Woman and the Furies clash over her fate, Danielle watches and makes a decision that will affect them all. Rucka just began a stint as the regular writer of the monthly Wonder Woman comic, but this is his first real exploration of the character. His treatment of the myths and lore associated with Wonder Woman/Princess Diana is impressive. Jones's beautiful pencils and attention to detail capture the characters' heart and emotion, as well as the soul of the cities and other background objects. This stand-alone story is a great introduction to the character and background of Wonder Woman, a seminal superhero who usually runs a distant third to Batman and Superman in DC's pantheon.