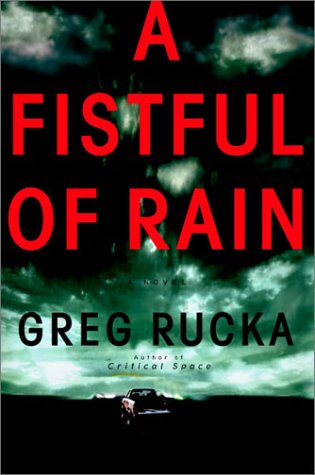 A FISTFUL OF RAIN

Loaded with grim, brooding detail—from the title quote (a Warren Zevon lyric) to the gallons of Jack Daniel's and beer with which rock musician Mim Bracca marinates her life—Rucka's latest thriller is bleakly atmospheric. His dark portrayals of the music scene, especially in his native Portland, Ore., are pitch perfect. Even the wildly improbable plot has strong moments of real terror and palpable personal tragedy. The real problem is Bracca herself. As a tough female cop shouts at her, "I have never encountered someone as stupid as you about helping herself." Sent home to Portland from the world tour of her hot new rock band, Tailhook, after her drinking gets way out of hand, Bracca immediately finds herself in another kind of nightmare. She is stalked and her privacy is violated; nude photos of her flood the Internet. She is also suspected of murdering her deceptively solid older brother and then of kidnapping and possibly killing their father, just released from prison, where he served 15 years for running over their mother in a drunken rage. Rucka, author of five other thrillers, including the popular Atticus Kodiak series (; ), knows how to create and sustain suspense. But Mim—despite what we learn about the various foster homes she was sent to before finding the musical family that nurtured her—remains such a boozy enigma that readers are likely to find their interest in her problems ebbing long before the tangled denouement.