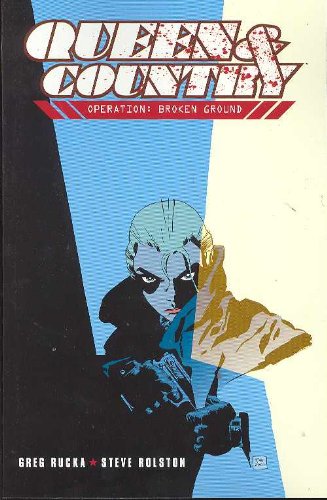 The more screwed-up the protagonist, the better a spy story tends to be, and Rucka (who's also written a series of prose mystery novels) has come up with a memorably dysfunctional antiheroine in Tara Chace, a burned-out, amoral "minder" (i.e., agent) for Britain's Ministry of Intelligence. This volume, which collects the first few issues of the Q&C comic book, opens as Chace carries out an unauthorized assassination in Kosovo—to the consternation of higher-ups, her boss orders her to off a former Russian general running arms to Chechen rebels—then makes a complicated getaway after being wounded. Chace soon learns she's become a pawn, now with a bounty on her head, in a seemingly endless game of international reprisals and counterreprisals. Newcomer artist Rolston combines bold outlines, expressive body language and clean, cartoonish lines for his characters, with detailed, realistic backgrounds; it's a trick often used in European comics, and he makes it work here. In fact, nearly everyone in this taut and violent drama seems to sag, physically and emotionally, under the psychological and moral weight of their grim profession. Together with Rucka's clipped, spare dialogue, the work offers the sense that espionage is just another job, exactly as grinding and tedious as any other—except that interoffice politics can get people killed. The action sequences are fast-paced and exciting, but the truly engaging part of the book is how sharply Rucka and Rolston are able to define even minor characters.