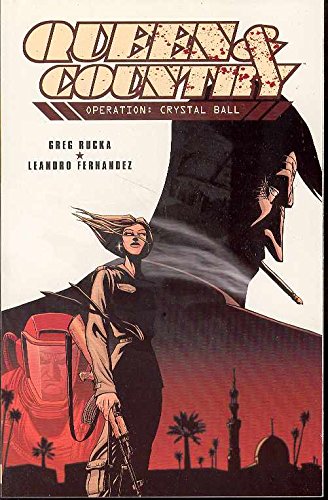 This fun espionage thriller overflows with geopolitical intrigue. Written with obvious relish by Rucka, author of the Atticus Kodiak novels, and rendered in stark b&w, cinematic panels by Fernandez, this work finds the British security team S.I.S. in a post–September 11 world, ready to strike at any potential terrorist threat. When a Lebanese citizen walks into a British embassy in Cairo and says he has information about a potential attack on British citizens, the unit moves into action across the globe, from Sarajevo to Rome, before finally tracing their villain in Osaka, on the verge of unleashing poison gas at a World Cup match. The characters, who are a typical blend of the tough guy, the pretty boy, the tough girls, etc., are somewhat interchangeable, but the action moves along at a brisk, suspenseful pace. In fact, Rucka does something unusual with the genre: his heroes appear to stumble a bit until they just happen upon the puzzle's solution at the very end. Most of the knock-down, drag-out action occurs as the characters chase various leads around the world. The actual ending—a simple shoot-out—is a pleasantly subdued way to end a story that's really about the chase anyway. Rucka focuses on detective work instead of highlighting heroics. There are a few forgettable subplots (one romantic, one political) but this book's pleasure lies in following the chase's twists and turns. Rucka and Fernandez accomplish this almost as well as any novel or film of the genre.