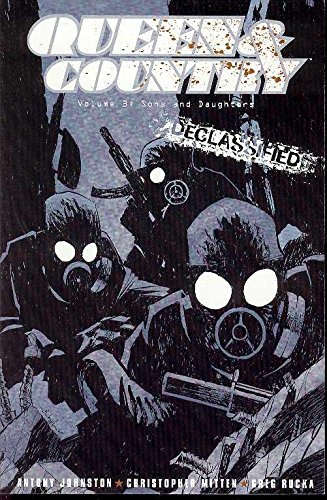 This noir thriller, part of a series created by novelist Greg Rucka, is set in Armagh, Ireland, and it's all mood and gloom. Lauren Mullen, whose father was killed in front of her by IRA soldiers when she was six, shows up to run for office on a platform of peace and Irish prosperity. Liam Finnegan, who betrayed and killed Lauren's father, looks upon her as unfinished business he'd like to deal with personally. He's the sort of psychotic who thrives on war; peace is too uncertain for him. Lauren is full of yuppie cunning, and Poole, the renegade cop out to save her, is the kind of daring rogue who's clueless at the core, as many true rogues are. The solid black, white and grays of the art give a sense of an unyielding world of people who are hard rather than trustworthy, but some of the characters are difficult to tell apart (in particular, Finnegan's moll, Naimh, looks too much like Lauren). The plot is a little too full of British and thriller clichés—"last man who said that got a bullet for his troubles"—and some of the slang is a bit self-consciously Irish lower class, but the story has atmosphere and a solid human touch at the core.