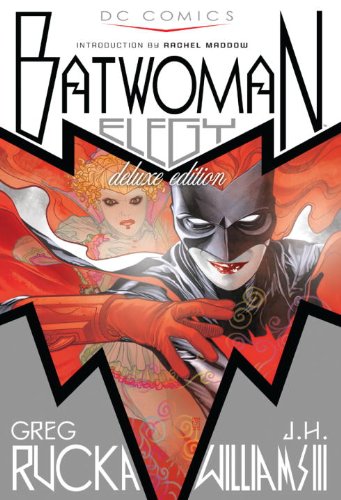 On the surface, this is a fairly straightforward superhero thriller, in which the new (lesbian, tattooed, Jewish) Batwoman tussles with a crime-worshipping cult that's trying to poison Gotham City, and discovers how her personal history is entwined with that of their leader, a pale, murderous Lewis Carroll–quoting porcelain goth. In practice, it's spectacular—the kind of adventure story that you race through the first time and return to, to pore over slowly. The obvious attraction is Williams and colorist Dave Stewart's artwork, whose mutable style and wildly inventive layouts get across the story's twisted chronology and psychological subtleties all by themselves. Almost every page is some kind of visual set piece with symbolic resonance, and the big action scenes are as thrilling as superhero comics get. The second half of the book, “Go,” is Batwoman's origin story and the history of her relationship with her father; Williams actually adopts different visual aesthetics for different types of flashbacks within it, including a clever pastiche of David Mazzucchelli's . Rucka's writing also deepens on closer examination, mostly because his Batwoman, Kate Kane, is a superhero like no other: don't-ask/don't-tell'ed out of the Marines, she treats her spandex-and-Kevlar work as a kind of military service that gives her life meaning.