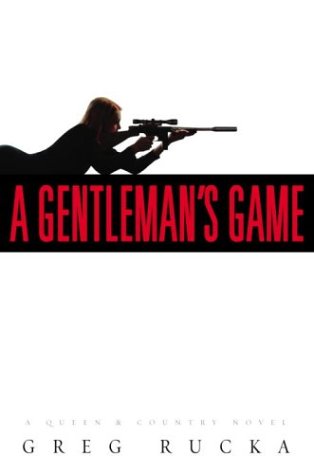 Inspired by his Eisner Award–winning Queen & Country graphic novel series, the author of the adrenaline-charged Atticus Kodiac thrillers ( ) offers up this British cloak-and-dagger hardcover introducing Tara Chase, an intrepid, relentless female assassin. In a coolly orchestrated terrorist raid chillingly reminiscent of September 11, a well-trained trio of al Qaeda–linked fanatics bomb London subway trains at three major stations, killing 372. In retaliation, Minder One (the head assassin of Her Majesty's Secret Intelligent Service) Tara Chase is given the assignment of killing Dr. Faud bin Abdullah al-Shimmari, a Saudi Arabian religious leader. She can't undertake an operation inside Faud's high-security Saudi homeland, but when the Mossad gets involved on a mission of its own, the hit is scheduled to take place on Yemeni soil. In a bit of bad luck, Chase completes her primary mission with a daring hit on Faud inside the Great Mosque, but ignites international outrage when she blows away a Saudi prince, too. As a result, her queen and countrymen betray her, and she is forced to flee with one final chance to avoid being sacrificed as a pawn in a worldwide political chess game. Though a trifle muddled by bureaucratese, the novel's superb pacing, offbeat characters, wry plot twists and damning insight into oily schizoid Middle Eastern diplomacy add up to an engrossing read.