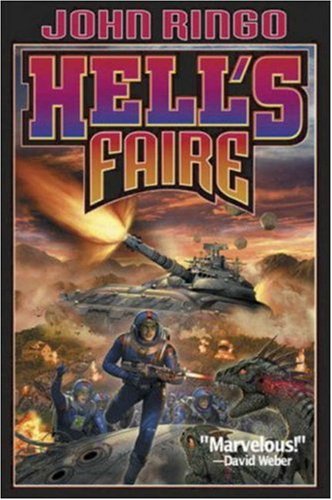 Humanity's war against the nasty alien Posleens continues in military SF author Ringo's latest entry in his popular Legacy of the Aldenata series (after 2002's ), but the unambivalent, almost innocent joie de combat of the earlier, pre-9/11 books is missing here. Having learned to combine human strategy with superior (although captured) technology, a Posleen overlord threatens to break through into unoccupied human territory. Opposing this effort are Major Mike O'Neal and his battalion of armored combat suits, plus conventional armor units lead by a Brobdingnagian mobile gun with a razor-wielding cartoon rabbit emblazoned on its side. The battle scenes are as vivid as ever, but the consequences lie more heavily than before on the warriors, as when O'Neal approves a nuclear strike near where his remaining family are located in order to save his command. It becomes increasingly clear that some alien "allies" would prefer that the humans and Posleens destroy one another and leave the galactic status quo undisturbed. Attentive readers may notice some overlap with , which Ringo explains in an afterword. Despite the overall dark tone, the author's trademark gallows humor shines through ("This is what you get for letting rednecks play with antimatter, boss"). So does a bit of hope: Ringo concludes his afterword by asserting "the good guys win in the end."