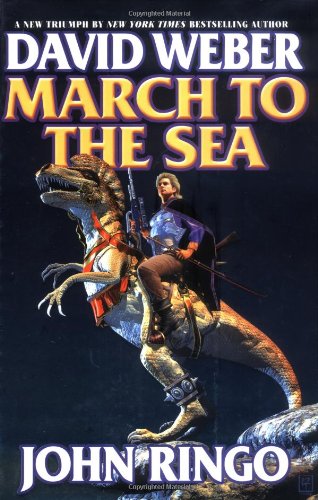 MARCH TO THE SEA

In this admirable continuation of the authors' (2001), Prince Roger McClintock and his diminishing band of Royal Marines are still on the soggy, hot planet Marduk and still having an interesting time. Their way to the sea and their ultimate goal is barred not only by jungle, swamp, weird wildlife and local politics, but also by a wandering barbarian horde known as the Boman. In addition, the Marines' technological advantage is shrinking faster than their numbers, their vitamins may run out before they reach safety and the course of true or any other love for the prince and female sergeant Nimashet Despreaux is not running smoothly. However, human and Mardukan are able to combine resources—including the engineering skills of the city of Diaspra, the wealth of the port city of K'Vaern's Cove, and the military talents of Marine Captain Pahner, exiled Mardukan prince Raster and formidable general Bistem Kar—to generate both weaponry and tactics to defeat the Boman. The development of a Mardukan combined-arms force will fascinate sophisticated readers (the manual of arms for a four-armed, 10-foot soldier is a thing of beauty), while the overthrow of the Boman will grip straightforward action lovers in spite of the staggering body count. And there's the distinct hint of at least one more volume about Prince Roger's homeward journey at the end of this one, a hint that will please many.