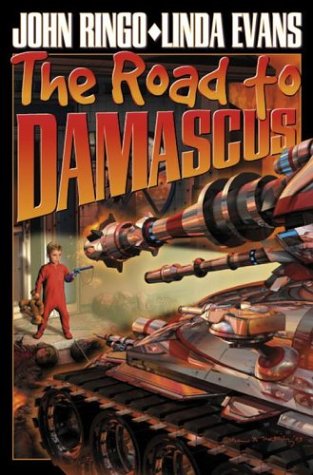 THE ROAD TO DAMASCUS

Readers interested in ethics as well as tactics will welcome this splendid new entry in the late Keith Laumer's Bolo series from military SF masters Ringo ( ) and Evans ( ). When the planet Jefferson faces an interplanetary every bit as nasty as when the Huns drove the Goths into Roman territory, commander Simon Khrustinov and his Unit SOL-0045, a "Surplus on Loan" Bolo, "but still the finest Bolo any man could claim as partner and friend," defeat the alien menace. (Bear in mind that a Bolo is a self-aware tank roughly the size of the Pentagon that packs more firepower than most combatant powers of WWII.) However, this turns out to be just the start of the trouble. Much of Jefferson's infrastructure has been devastated, and the reconstruction entails unpopular taxes and conscription. When the government falls into the hands of radical utopians, the planet's new rulers eventually attempt to use the Bolo to destroy their class enemies in a blaze of ethnic cleansing. The subsequent conflicts within the sensitive Bolo's core programming cause the machine to question the reason for its existence. Laumer may rest easily knowing that his creation is in good hands. Ringo and Evans have written a strong cautionary tale that entertains as well as instructs, even if at times those lessons can be less than subtle.