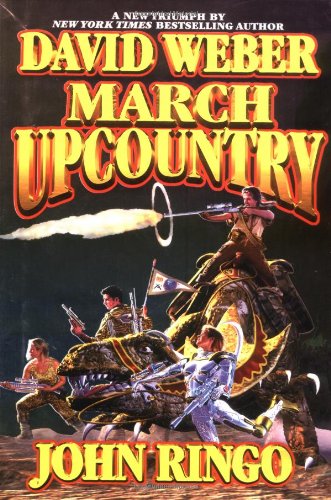 An established master of military SF, Weber, and a fast-rising comer in the genre, Ringo, combine forces in the first of a new series sure to please their fans. Prince Roger Ramius Sergei Alexander Chiang MacClintock has a problem. Thanks to terrorist sabotage, he and a company of space marines are marooned in the wilderness of the planet Marduk, noted for high mountains, high temperatures, low technology and the short tempers of its nine-foot, four-armed, slime-covered natives. They have to get out of this place. In their effort to do so, they win allies among the Mardukans (mostly in legitimate ways) and overcome others by judiciously combining sneakiness and firepower. Along the way, the prince turns from a spoiled brat into a useful, even valuable member of the company. This coming-of-age theme often crops up in military SF, and indeed both authors are working within territory they know well. The pace never gets too slow, despite generous world-building and extended action scenes. Another strength is the deceptively deep characterization—particularly of Prince Roger, whose transformation draws on skills and character traits carefully planted early in the novel. The book could actually use more background (the villainous terrorist Saints are shadow figures) and ends on a cliff-hanger (or cliff-climber), but overall the superb storytelling will add considerably to the reputation of both authors. ()