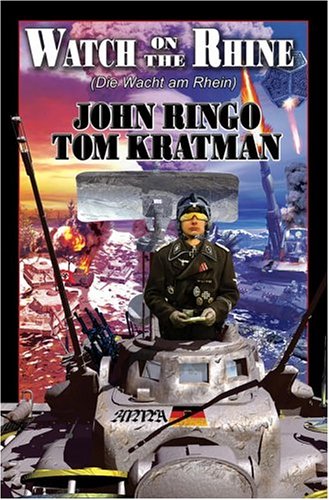 Watch on the Rhine (Die Wacht am Rhein)

An axiom of military science is that an army reflects the society it protects, but what happens when that society is confronted with a crisis its dominant ideology can't solve? In this provocative addition to the Posleen War series, a galactic civilization genetically predisposed toward pacifism offers humanity advanced technology so that we can defend ourselves (and them) from the only other sentient species capable of violence—think "Mongol horde in space." After the first enemy landings in 2004, the German chancellor decides, despite fierce opposition, to rejuvenate survivors of the Waffen SS. Eager to redeem their tarnished honor, these veterans display the same steadfastness and fortitude that they did in Russia and Normandy. Ringo ( ) and Kratman ( ) pull no punches in this audacious and deliberately shocking effort, contrasting the ruthlessness of the (mostly) former Nazis with the contemporary politicians' disastrous insistence on forcing reality into a politically correct mold. Readers who can overcome their ideological gag reflex will be rewarded with an exciting view from "the other side of the hill."