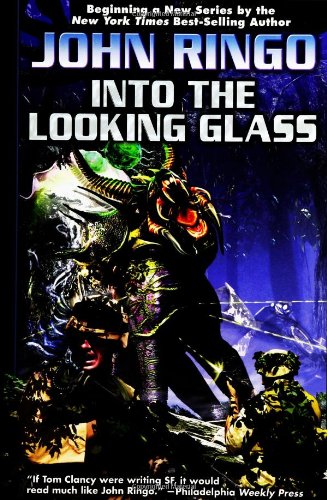 Into the Looking Glass

At the start of Ringo's apocalyptic near-future SF novel, an experiment in creating quantum particles destroys much of central Florida, opening up gateways to other realities, some of which are inhabited by intelligent aliens intent on transforming our world into theirs. These new realities are as cosmically daunting as anything in the fiction of H.P. Lovecraft, to whom the author alludes, but a resilient humanity, instead of giving in to despair, fights back. Ringo ( ) excels in the depiction of combat, managing to capture the carnage and horror while maintaining a sense of the absurd. The plot flows naturally from the implications of the scientific background, but with the kind of unexpected twists that Ringo has made his hallmark. While the ending smacks a bit of deus ex machina, this thoroughly enjoyable ride should appeal to techno-thriller fans as well as to military SF buffs.