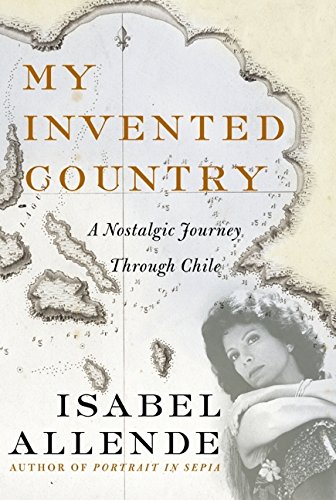 MY INVENTED COUNTRY: A Nostalgic Journey Through Chile

Allende's novels—; ; ; etc.—are of the sweeping epic variety, often historical and romantic, weaving in elements of North and South American culture. As with most fiction writers, Allende's work is inspired by personal experiences, and in this memoir-cum-study of her "home ground," the author delves into the history, social mores and idiosyncrasies of Chile, where she was raised, showing, in the process, how that land has served as her muse. Allende was born in Peru in 1942, but spent much of her childhood—and a significant portion of her adulthood—in Santiago (she now lives in California). She ruminates on Chilean women (their "attraction lies in a blend of strength and flirtatiousness that few men can resist"); the country's class system ("our society is like a phyllo pastry, a thousand layers, each person in his place"); and Chile's turbulent history ("the political pendulum has swung from one extreme to another; we have tested every system of government that exists, and we have suffered the consequences"). She readily admits her view is subjective—to be sure, she is not the average Chilean (her stepfather was a diplomat; her uncle, Salvador Allende, was Chile's president from 1970 until his assassination in 1973). And at times, her assessments transcend Chile, especially when it comes to comments on memory and nostalgia. This is a reflective book, lacking the pull of Allende's fiction but unearthing intriguing elements of the author's captivating history.