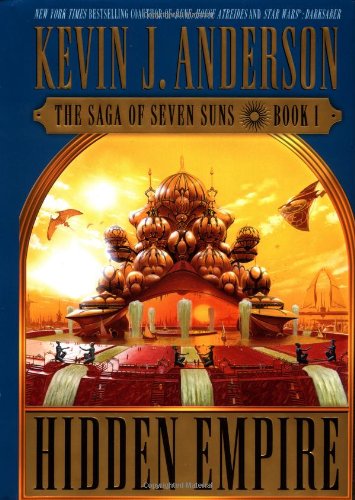 In this stellar launch of a new series, bestseller Anderson ( spinoffs with Brian Herbert; and books) delivers action, engaging characters and credible fantastic worlds in spades—or , the fuel vital for spaceships in the year 2427. The Terran Hanseatic League, in a heady rush of manifest destiny, turns Oncier, a huge gas planet, into a sun so its four moons can be used for colonization. In the process, the Terrans disturb the ancient but dwindling Ildirans, their uneasy allies, whose leader, the Mage-Imperator, suspects that Terrans are far too eager to take over the spiral arm. Still worse, by inadvertently destroying Oncier's hitherto unknown colonists, the powerful hydrogues, the conversion of Oncier sets off a catastrophic conflict that threatens the existence of all Terrans and Ildirans. The Earth Defense Forces of the Terran Hanseatic League, the Worldtrees and Green Priests of Theroc, the gypsy Roamers who mine —all must unite with the Ildirans to fight the alien menace. Book one sizzles with a fast-moving plot woven tightly with vivid characterizations: the space cowboys Jess, Ross and Tasia Tamblyn; the exotic Ildirans; the grotesque Mage-Imperator and his handsome Prime Designate son, Jora'h; Beneto Theron, his clan and the bewitching Nira Khali; the appealing and not-so-appealing humans, Raymond/Peter and Chairman Basil Wenceslas; and many others, all conspiring to make this fascinating future epic one not to be missed.