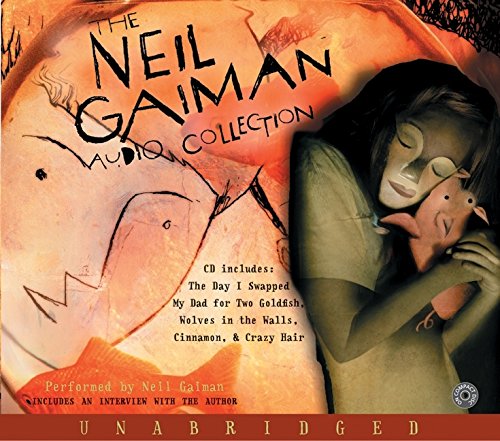 As author Gaiman demonstrated on his recording of his first children's novel, , he's more than up to the task of reading his work with great style. Here, again, he performs as a consummate storyteller, reading four stories, two of which have been published as picture books. Gaiman has a slow, suspense-building pace and a slightly ominous tone on "The Wolves in the Walls," in which Lucy tries to warn her preoccupied family of what the creaking, crackling, scritching, scratching noises in their house must surely be. "On The Day I Swapped My Dad for Two Goldfish," Gaiman's first picture book, the author/narrator rolls along at a jaunty, entertaining clip. On "Crazy Hair," Gaiman is sprightly, reading this silly rhyming poem about the very wild 'do of the 11-year-old narrator, big enough to house nesting birds and lions making a lair, and very resistant to brushing. Listeners and fans are also treated to a reading of "Cinnamon," a colorful original fable about a princess who refuses to speak (though a tiger in the exotically set tale has lots to say). which had previously appeared only on Gaiman's Web site. Gaiman's daughter Maddy conducts a warm, revealing and lively interview with her dad that is likely to charm listeners of all ages. Ages 5-up.

The Day I Swapped My Dad for Two Goldfish .