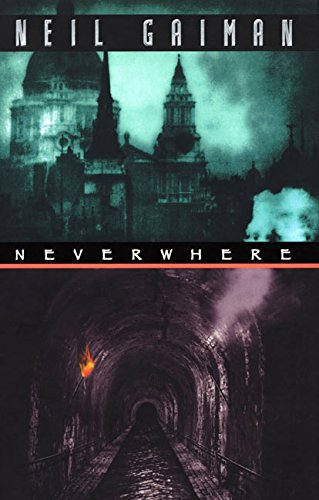 London businessman Richard Mayhew sees an injured, homeless girl on the street one evening and is compelled to bring her back to his apartment. In this debut novel by Gaiman, author of the wildly successful graphic novel series The Sandman, the girl, whose name is Door, ushers Richard into a strange new world. She communicates with rats and pigeons and is amazed to find herself in what she calls ""London Above."" When she leaves, however, Richard's ordinary life vanishes with her. He discovers that he is virtually invisible on the street, in his office, even to his fiancee. Believing that only Door can help him, he finds his way to London Below, a menacing, magical netherworld located in the sewers, tunnels and abandoned Underground stations. Inhabited ""by the people who fell through the cracks in the world,"" London Below is equal parts fantasy, nightmare and ragged medieval court life. There, Mayhew joins Door, a female warrior called Hunter and an opportunistic marquis on a quest to discover why Door's family was executed. Villains abound, including a pair of courteous but malevolent assassins. Gaiman blends history and legend to fashion a traditional tale of good versus evil, replete with tarnished nobility, violence, wizardry, heroism, betrayal, monsters and even a fallen angel. The result is uneven. His conception of London Below is intriguing, but his characters are too obviously symbolic (Door, for example, possesses the ability to open anything). Also, the plot seems a patchwork quilt of stock fantasy images. Adapted from Gaiman's screenplay for a BBC series, this tale would work better with fewer words and more pictures. 125,000 first printing; major ad/promo; author tour. (July)
close
Details