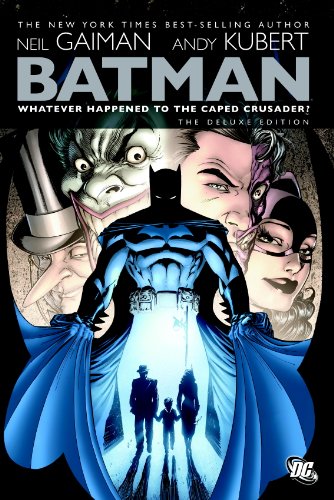 Batman: Whatever Happened to the Caped Crusader, the Deluxe Edition

Following the “death” of Bruce Wayne in last year's “Batman: R.I.P.” arc comes Gaiman's loving eulogy not just to Batman but to the Batman of each era since the character's debut. Bolstered by slick art from Kubert ( ; ), Gaiman's lyrical chops are in fine form, weaving a surreal wake in which characters from Batman's history take turns relating what he meant to them, and their takes on the Dark Knight and the dangerous microcosm he fought for and eventually purportedly “died” to protect. Although this is obviously a love letter from one of the comics medium's premiere talents, the volume will appeal more to readers well-versed in Batman's continuity than Gaiman's normal legion of fans As the finished story only amounts to two issues of material, this hardcover is padded out with lesser—though not badly written by any means—stories teaming Gaiman with Simon Bisley, Mark Buckingham, Kevin Nowlan and Bernie Mireault, plus a sketchbook by Kubert.