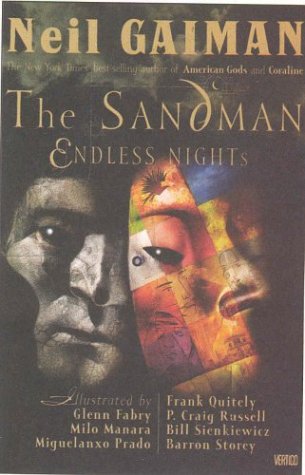 Now that he's a bestselling fantasy novelist, Gaiman returns to the comics series that made his reputation with this new volume of seven gorgeously illustrated stories. Gaiman specializes in inventing fantastic allegories for the quotidian, in a voice that casually shifts between uneasy realism and Borgesian grandeur. In cosmology, "The Endless" are seven immortal siblings who personify abstract concepts: Dream, Death, Destiny and so on. This work devotes a story to each of them, drawn in distinctly different styles by an all-star lineup of American, British and European cartoonists and fine artists. Gaiman is famous for writing to his artists' strengths, and he does so here. P. Craig Russell draws the surreal fantasia "Death and Venice" with the opulent brio of his opera adaptations. "What I've Tasted of Desire" is a darkly sexual fable, painted by Milo Manara in the style of his more X-rated work. A couple of the stories find Gaiman working in a more experimental mode than usual, notably "Fifteen Portraits of Despair," a set of anecdotes and prose poems accompanied by Barron Storey's tormented, abstract drawings and paintings. Longtime comics fans will notice plenty of inside jokes in "The Heart of a Star," but most of this book is a red carpet—or perhaps a Persian rug—rolled out for Gaiman's prose readers to see his visions turned into lush, dramatic images.