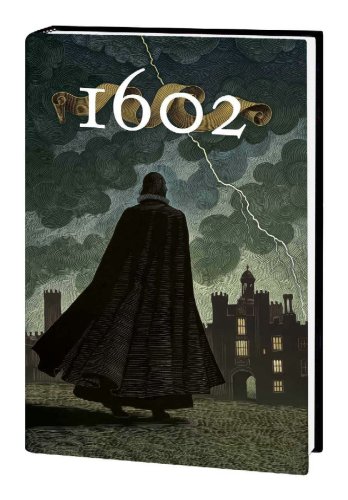 The always inventive Gaiman has concocted an unlikely—but fantastically successful—superhero comic that transfers Marvel's classic characters to the Elizabethan period. Nick Fury is still a lethal government operative, but now he's an adviser to Queen Elizabeth. Her Majesty is equally reliant on magician and doctor Stephen Strange. X-Men mentor Charles Xavier still shepherds a band of mutant teens, only now he's called Carlos Javier, and the mutants are known, and mistrusted, as "witchbreed." Carlos's mysterious nemesis has taken on a new job: grand inquisitor of the Spanish Inquisition. Peter Parker (here "Parquah") is still a confused but well-meaning teenager who has yet to be bitten by a radioactive spider. Placed in a period landscape (rendered in rich, painterly panels by illustrator Kubert and digital painter Richard Isanove), these familiar characters must grapple with the issues of the day, chief among them the machinations of the evil King James of Scotland. And, in classic superhero style, they must save the world. The improbable combination works remarkably well, as the superheroes' strange abilities adapt to Elizabethan culture. This glorious adventure is peppered with Scott McKowen's gorgeous, moody cover-art woodcuts.