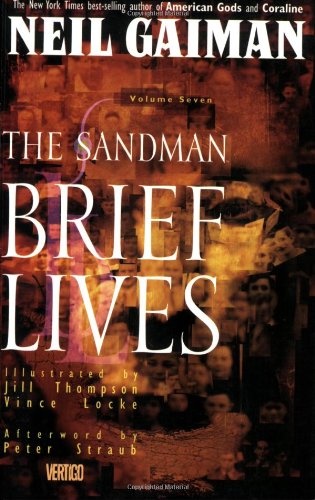 Gaiman's very popular Sandman series (this is the eighth book in the series) continues with another tale of the Endless, the family of mythic cosmic beings that govern the psychic and physical realms of Dream, Desire, Despair, Destiny, Delirium, Destruction and Death. Morpheus, Lord of Dreams and the central figure in the series, is asked by his sister, the unstable and touchingly demented Delirium, to help locate their brother Destruction. Destruction abandoned his duties 300 years ago (about the time of the Enlightenmentnt), dropping out of sight after a prescient and despairing glimpse of the rise of human reason and its own destructive proclivities. The grimly ironic Morpheus and his whimsically erratic sister travel among the mortals of earth in search of their brother and ultimately learn something of Destruction's reasons for abdicating. Gaiman's works often follow the plots of classical and mythical narratives and Brief Lives, like his other works, can often look and sound as ponderous as a bad period costume movie. But his works are also driven by sharply drawn characters and his knack for capturing the patterns of intimacy, even in an otherworldly setting, can be affecting. Thompson and Locke contribute subtle and vividly colored drawings, rendered in an awkward but agile line. (Nov.)
close
Details