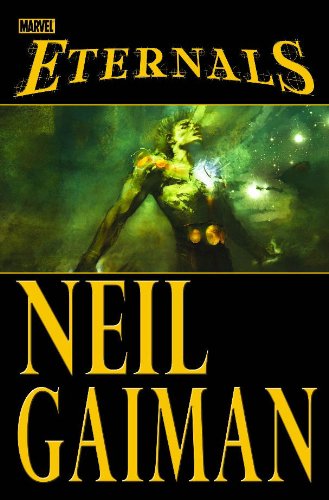 ack Kirby's old Eternals series gets a serious dusting-off from Gaiman ( ) and artist Romita. The Eternals, a super-race, are now scattered and forgetful of their powers and immortality, living mortal human lives of supreme normalcy (Sersi is a New York party girl, while Makkari believes himself to be Bellevue ER doc Mark Curry). Meanwhile their age-old enemies, the Deviants, stalk the earth with nefarious intentions, and at least one of the super-duper-race Celestials (who created both Deviants and Eternals eons ago) may be returning to Earth. The source of all this forgetfulness and strife appears to be the eternally 11-year-old Sprite, who desires to be allowed to age like an actual human. It is easy to spot Gaiman's touch in this modern-day clash between ancient forces, as he shies away from Kirby's '70s-era, –style alien mythologizing to focus more on the characters' slow coming to grips with the enormity of their identity and the loss of humanity that comes from being an Eternal. Romita's storytelling is strong without coming near Kirby's epochal original. While Gaiman fans will still sign up, it isn't long before the tale gets tangled in the Olympian scope of this often baffling struggle.