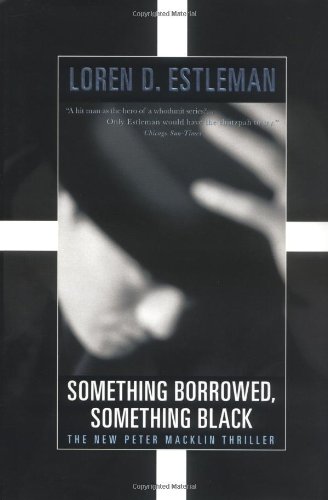 SOMETHING BORROWED, SOMETHING BLACK: A Peter Macklin Novel

Peter Macklin is a truly compelling antihero—and not the kind who's secretly saving the world. This is the real thing: a man who kills much too easily and who knows an enormous amount, but not necessarily right from wrong. Macklin (last seen in 1991's ) has retired from the hit-man business and married Laurie, a young woman who knows nothing of his former career. They're on their honeymoon in Los Angeles when Macklin is forced back into his old calling by a Midwestern crime lord who's interested in expanding his territory. Traveling to San Antonio, Tex., to finish somebody else's botched hit, Macklin must remember how to read every inadvertent message from his contacts, his target and his potential enemies. He's a former master at the unspoken and the unintentional, despite being a little rusty on the fine points. Back in L.A., Laurie is being held hostage. At first she thinks the lanky cowboy named Abilene is just keeping her company while her husband is away "on business," but a fist in the face changes her take on things. Fortunately, Laurie is as resourceful as Abilene is ruthless, and she saves herself from his everpresent knife more than once. The story vibrates with letter-perfect details, and the plot, with changing locations and changing points of view, is deftly handled. Each character, major or minor, is fresh and real, and this creates a terrific energy throughout the book, demonstrating once again why Estleman has won so many awards.