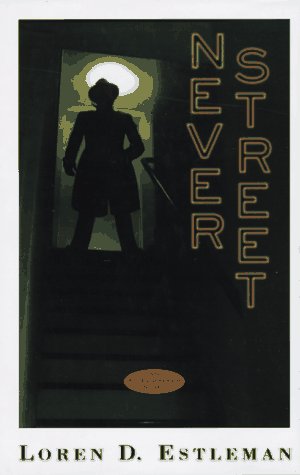 By rigidly sticking to the form, Estleman has become the reigning king of the traditional, tough-yet-tender style of crime novel. Amos Walker, his Detroit gumshoe who returns in fine style after a seven-year absence (Sweet Women Lie), is a welcome shot of retrograde private-eye cool. The narrative pieces add up to a film-noir nightmare; the missing guy, the silky mistress, the worried wife, the slick business partner, the scheming brother-in-law. It all ought to be so many black-and-white images on celluloid. And it is, as Estleman divides his book into ""reels"" instead of chapters and makes Neil Catalin, the missing man, obsessed with the dark side of cinema. Neil, who watched death and treachery on film for long hours before he vanished, cracked up once before and spent time in a sanitarium in the north of Michigan, where a doctor videotapes his sessions with wealthy clients. Amos is hired by Gay Catalin to find her missing husband; Neil's brother-in-law, Brian, steals film equipment from Neil; Neil's former lover, Vesta, is an ambitious actress and just the kind of good/bad girl Amos finds it hard to say no to. Estleman expertly manipulates a complex plot, boobytrapping his tale with movie lore and arty imagery. It's an ambitious conceit that he pulls off admirably. Two revelations near the end aren't especially tough to anticipate, but by then readers will have grown to love for its own sake the monochromatic world in which they've been immersed, shot through with cigarette smoke, slick patter, strong liquor, icy betrayal and no shortage of hard irony. (Apr.)
close
Details