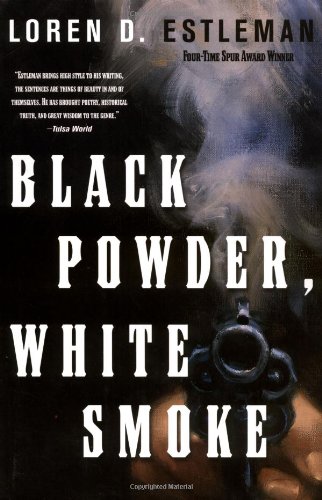 Estleman () adds another absorbing saddle yarn to his more than 40 westerns and crime novels. Set in 1885 in an Old West culture of bad whiskey, low morals and high adventure, the story follows four men on a collision course with a destiny they neither expect nor welcome. Ex-slave Honey Boutrille runs a New Orleans bordello called the House of Rest for Weary Boatmen. When he kills a white man for mutilating one of his girls, Honey must flee west to escape the hangman. Meanwhile, in San Francisco, former Civil War bushwhacker Twice Emerson, now a train robber and murderer wanted for the shooting of a Chinese immigrant, decides he will breathe easier and longer if he moves his robbing-and-killing operation to the Rockies. As these two outlaws run from posses, marshals and vigilantes, two other men pursue them with more benign motives. Journalist Ernest Torbert has given up a job creating ads for Chicago meatpackers to track down Honey and write a lurid biography of the fugitive. Casper Box, a wily showman and theatrical agent, wants to sign up Twice for a Wild West show before a lawman's bullet gets to him first. After some bloody and hair-raising adventures, all four men eventually end up in Denver, the Gomorrah of the Rockies, where they pull off a climactic performance. Estleman combines action, suspense and a twist of humor in this satisfying drama full of Western lore.