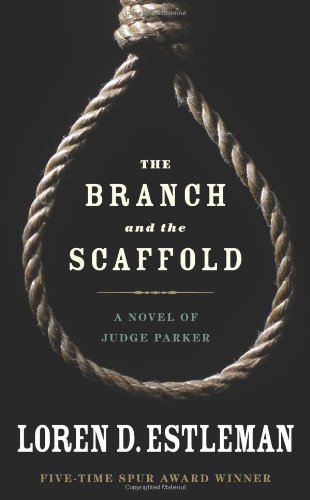 The Branch and the Scaffold

Estleman ( ) turns in a sharp, funny and exciting western centering on Isaac C. Parker (1838–1896), the notorious federal “Hanging Judge” for Arkansas and the Indian Territory (Oklahoma) from 1875 until his death. Aided by his malevolent and ruthlessly efficient executioner, George Maledon, and a small army of deputy marshals, Estleman's Parker crusades to rid his jurisdiction of murderers, rapists, thieves and other unfragrant owlhoots. Without using fictional characters, Estleman loads his entertaining yarn with colorful anecdotes of notorious criminals like Belle Starr, Ned Christie, Rufus Buck and Bill Doolin, as well as tenacious and famous lawmen like the legendary Three Guardsmen—Heck Thomas, Chris Madsen and Bill Tilghman. Parker's liberal application of the gallows took a terrible toll on his health and family life, and earned him many enemies: while outlaws feared and respected him, lawyers and politicians hated him. (“I'd as soon hang a Republican as a Democrat,” Parker once said.) There is no mystery or surprise; Estleman sticks to fictionalized history throughout. This is a vivid, fast-paced western adventure brilliantly presented by a masterful storyteller.