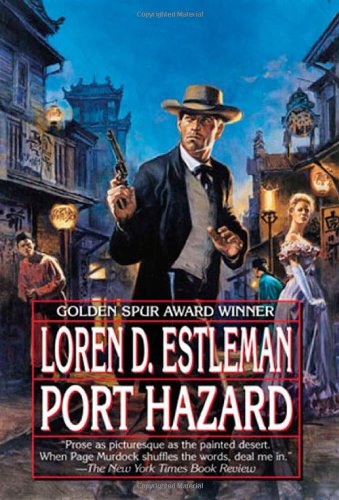 Western writer and crime novelist Estleman ( , etc.), winner of both Shamus and Spur Awards, is at the top of his game in this latest installment in a series featuring Page Murdock, deputy U.S. marshal. Murdock may be a peace officer, but there's little real peace when the cynical, crusty deputy is around. Together with his boss, Judge Harlan Blackthorne, a hardcase jurist who never met an outlaw he wouldn't hang, he serves up swift justice in the Montana Territory in the 1880s. Murdock is puzzled by assassins repeatedly trying to kill him when he is minding his own business, but the judge discovers the motive. A shady conspiracy called the Sons of the Confederacy is plotting to renew the Civil War, and their first step is to murder prominent lawmen and other public officials. The judge, unconcerned about jurisdictional niceties, sends Murdock to San Francisco, the home of the conspirators, to root them out before their aim improves. Murdock deputizes his own backup by hiring a black ex-soldier named Beecher, who is armed with a fearsome Le Mat pistol that fires shotgun shells. Murdock and Beecher find themselves awash in the filth and corruption of San Francisco's Barbary Coast, surrounded by gamblers, drunks, vigilantes, whores, petty thugs, crooked politicians and the deadly Chinese gangs called tongs. Their investigation reveals much more than they expected, including an undercover Pinkerton detective, a dwarf with an iron ball on a chain attached to the stump of his arm and a dead man who isn't really dead. Snappy dialogue, fast-paced action, colorful characters and plenty of bullets, booze and blood make this western crime drama a wicked romp through the legendary gutters of the Barbary Coast.