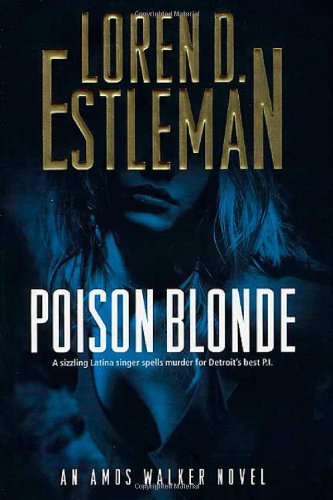 PI Amos Walker makes a two-fisted foray into the Detroit Latin music scene in Estleman's 50th book, the 17th entry in this streetwise series (after 2002's ). Eschewing the suburbs, Amos inhabits a tiny house bordering on the Polish enclave of Hamtramck, surrounded by metropolitan Detroit, and works out of a dingy downtown office with a resident wino. When Gilia Cristobal, a glitzy young Latin music sensation, summons him to find the woman blackmailing her, Amos delves into her past and discovers a very different señorita from the platinum bombshell strutting the stage. A Central American freedom fighter unjustly accused of murder, Gilia fled north, assumed another identity and never looked back. Terror resurfaces when the decayed body of a woman with the same name turns up next door to a Mexicantown woman who breeds vicious dogs for sale to unsavory characters. Drug smuggling, torture and the music industry goon squad keep Amos running and calling in favors from press and police friends. In the great noir tradition, he rarely blows his cool, the throwaway lines never let up and though some may think he's over the hill, the Vietnam vet perseveres. Wordsmith par excellence, Estleman has Amos deliver passionate laments for his city that add a melancholy counterpoint like background music.