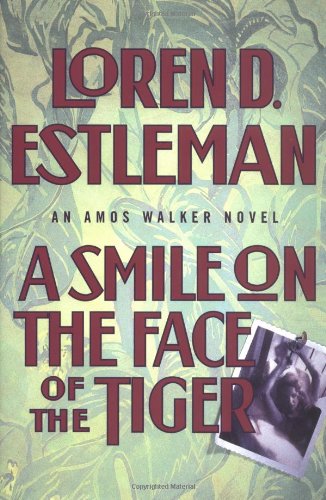 A Smile on the Face of the Tiger

HThe three Shamus Awards Estleman has won for his Amos Walker mysteries (The Hours of the Virgin, etc.) testify to his reputation as the torchbearer of the classic PI yarn. In his 14th novel about the tough-minded Detroit gumshoe, Estleman pays explicit tribute to his artistic ancestors, dedicating the book to ""Hamilton, Prather, McCoy, and Spillane"" and others, and centering its complicated, absorbing plot around the fates of a classic paperback writer and the bombshell blonde who posed for his books' lurid covers. Walker is hired by sleek Louise Starr, owner of a nascent New York publishing house, to find Eugene Booth, author of such titles as Tough Town and Bullets Are My Business. Booth has called it quits on a contract to reprint his best-known novel, Paradise Valley, set within the horrific Detroit race riot of June 1943; Starr wants to know why. Walker locates Booth, a broken old drunk tapping at a manual typewriter, at a fishing lodge north of Motor City. They drink and they talkDabout the murder of Booth's wife way back when and about what really went down at the riot; hours later, Walker finds Booth hanged in his cabin. Suicide? Then how to explain the ""heeled"" guy in an adjacent cabin, who Walker soon learns is hit man-turned-bestselling author Glad Eddie Cypress? Fleta Skirrett, former paperback jacket honey, now waiting to die in an old folks' home, offers some clues, and so does the son of the painter of Booth's covers, who lives surrounded by plastic-wrapped paperbacks. A good, involving mystery featuring strong characters and prose as smooth as the brim of a fedora, this novel makes smart points about writing, publishing and the cult of mysteries. Anyone who appreciates the difference between a gat and a gun, a gam and a leg, is going to wolf it down. (Aug.)
close
Details