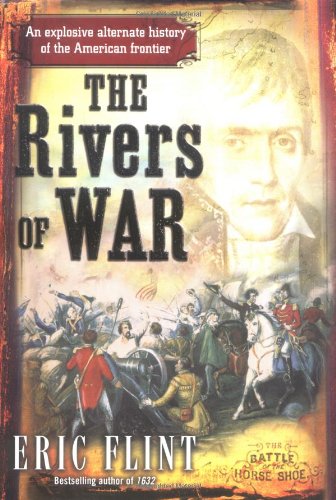 THE RIVERS OF WAR

The first of a projected two-volume series, Flint's witty, tightly written alternative history presents a subtly revised version of events in the final year of the War of 1812. In March 1814, in the Mississippi Territory, Gen. Andrew Jackson's Tennessee Militia and Cherokee warriors fight a decisive battle against the Creek Indians. In August, a young Sam Houston, the adopted son of a Cherokee chief, arrives in Washington in time to help defend the Capitol building from invading British troops. The British fail to reach Fort McHenry, but they do get to New Orleans, where they adopt a slightly more intelligent plan of attack than in reality. While the enlightened political and racial attitudes of some white characters may seem unrealistic, such views weren't unheard of even in the South before significant expansion west and the emergence of the cotton kingdom. Flint ( ) offers historical figures rarely seen in fiction, such as James Monroe, in pre-Doctrine days, and the British general Robert Ross ( killed outside Baltimore); thorough scholarship in Napoleonic-era warfare; and strong, credible women. Fans will cheer even louder if this outstanding start turns out to be the first of a long saga.