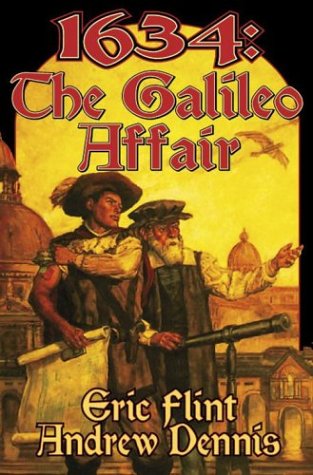 After the emotionally draining tragedy that concluded Flint and David Weber's (2002), Flint ( ) and newcomer Dennis provide a more lighthearted interlude in Renaissance Italy. Grantsville, a West Virginia mining community that a black hole transported back to the Thirty Years War, now forms the kernel of a fledgling democratic Germany. An embassy to Venice is led by Grantsville's only Roman Catholic priest, whose revelations about Vatican II meet a surprisingly unhostile reception. When the pope appoints this priest advocate for Galileo at his trial for supporting the Copernican theory, teenagers from uptime, combined with local Italian sympathizers, are convinced by Cardinal Richelieu's agents to stage a rescue mission whose assured failure will discredit the Americans' efforts. In many ways this reads like a Tom Clancy techno-thriller set in the age of the Medicis with the Three Stooges thrown in for seasoning. In the tradition of Italy's commedia dell'arte, the rollicking plot serves to bring two lovers together despite formidable obstacles. It's refreshing to read an alternate history where the problems of two people do amount to a hill of beans, which isn't surprising, since all the installments in this popular series to date have focused as much on ordinary people as on kings and generals. The closing chase sequence is literally a riot.