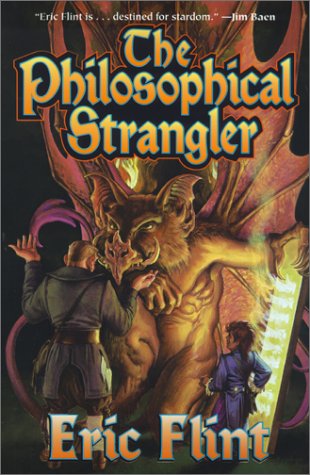 This oddly satisfying humorous fantasy usually achieves the zany and frequently the bizarre. In the city of New Sfinctre the professional strangler and amateur philosopher Greyboar and his agent and sidekick, Ignace, accept a contract they're unable to fulfill, but which leads to some amusing adventures. At their watering hole, the Sign of the Trough, the pair encounter a nearsighted swordswoman named Cat (actually Schrödinger's Cat, but she can't find Schrödinger) and learn that Gwendolyn, Greyboar's Amazonian sister (who's active in the literally underground dwarf-liberation movement), has an artistic lover named Benvenuti. After Benvenuti's disappearance, the duo have to spring Cat from prison, help Abbess Hildegard of the Sisters of Tranquility intimidate a fallen angel and harrow hell and several even worse places to get Benvenuti back. The author's inventiveness is unblushingly demanding of the reader—passages in the journey to hell satirize (or more accurately, skewer or even impale) role-playing games, Dante, the Greek playwrights and the Norse sagas with ferocious accuracy and a complete lack of scruples. Good taste prevails most of the time, and there are a fair number of serious grace notes, such as the cult of Joe, the caveman who invented God (aka the Old Geister). The sexual content is higher, but otherwise Flint can stand comparison with at least early Terry Pratchett. Fans of Harry Turtledove's elaborate wordplay will also revel in this volume. (