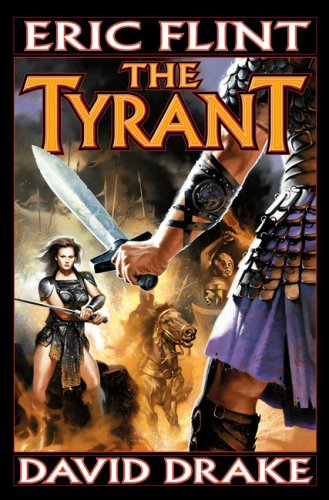 Veteran Drake () and relative newcomer Flint () manage to instruct as well as entertain in this latest volume in their popular Belisarius series. Human space has fallen into anarchy and barbarism after the collapse of the Galactic Federation. On the planet Bellview, an artifact of the past—a sentient battle computer called Center—selects a young officer, Raj Whitehall, to be the father of the future in a revived Federation. After accomplishing their mission on Bellview, Raj and Center have their personalities downloaded into thousands of probes and sent into space. On the planet Hafardine, one of these probes merges with scholar Adrian Gellert, who holds a position roughly equivalent to a Greek in the authors' retelling of the Roman Civil War. Center and Raj's sociopolitical insights prove to be of critical importance to Gellert's father-in-law, the Justicar Verice Demansk, in his attempts to save Vanbert from itself. Most of the narrative excitement derives from the introduction of gunpowder and steam technologies to ancient warfare, while thorough knowledge of the underlying causes and conditions that shaped Rome's destiny lends authority. There's a sense of inevitability to the success of the progressive forces, and more than a little deus ex machina in the device of the omniscient cybernetic advisers. Because the opposition is uniformly incompetent and cupidinous, the story reads at times as if it were a didactic Soviet science-fiction novel, but most military SF fans won't mind.