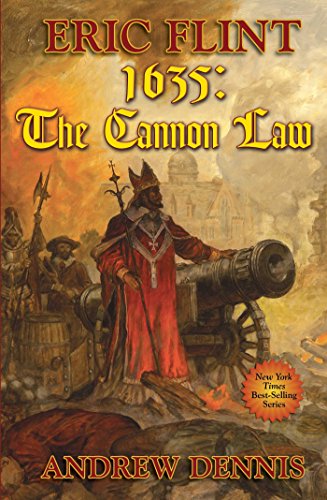 Flint and Dennis's solid follow-up to (2004), also set in Renaissance Italy, offers a deliciously Machiavellian plot. The temporally displaced modern Americans from Grantsville, W.Va., having met with a surprisingly friendly reception from Pope Urban VIII, who views with favor some of the 20th-century reforms instituted by the Holy See, run afoul of the Spanish inquisitor Cardinal Gaspar Borja y Velasco. Borja regards Urban's failure to condemn the whole lot to the stake as proof that the pope is unfit to sit on the throne of St. Peter, and believes that Spain's political and military power has earned it—and him—the right to pre-eminence. The cardinal orchestrates a campaign of dirty tricks and rabble rousing to undermine the pontiff's capable but nepotistic family. If this novel is not as rollicking as its predecessor, that may be because there really isn't anything funny about the Spanish Inquisition, Monty Python notwithstanding.